Click the below picture to see more pictures of Harbin. 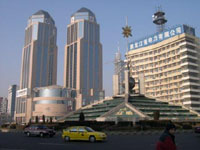 Harbin is the capital city of Heilongjiang province, China's most North-easterly province. The province has a population of 40+ million and Harbin's population is officially 16 million with over 6 million living in the city center, making Harbin one of China's 10 largest cities. As the Province's largest city and capital, Harbin's economy is largely white collar, servicing the primarily agricultural and heavy industry bases of the rest of the province.
Harbin is a more traditional city than the major cities of southern China since it has not been westernized as much. However, Harbin is a more developed city than most westerners expect of China. Anything that you would expect to find in stores, in the West, can usually be found here. In general the only exceptions are some particular brand names.
Harbin has most forms of entertainment and sporting locations. However western activities such as squash, swimming, or bowling are expensive by local standards. Most Chinese parties or celebrations are held in restaurants, which often have private rooms with karaoke. Some western-style bars/clubs are available but they also tend to come with western prices. There is no shortage of movies to watch. All of the latest movies are available by buying cheap DVDs or via download/streaming.
As a northern city, Harbin has similar weather to the Canadian Prairies or American Midwest. The summer is usually 20 to 35 C and the winter -10 to -30 C. During the winter, Harbin has an ice festival which is the city's most well-known tourist attraction.
Westerners are not common in Harbin. There are usually about 300-400 westerners here with about half being students. There are also usually several hundred Russians in town on shopping trips. Therefore, non-Chinese tend to stand out in a crowd. If you are shy to be noticed, Harbin is not the place for you.

Cost of Living
The average income in Harbin is about 1,500 RMB and the cost of living is lower than other cities. Therefore most people earning 2,000 consider it to be a good income. For food and basic shopping, a person can live comfortably on 1,000. However, most foreigners spend more than that because they tend to buy more imported goods and eat more frequently in restaurants including McDonalds, Pizza Hut and KFC. Therefore, if you want to save money for travel or to send back home, you should be able to save a good portion of your salary, depending on how native you want to live.
A sample of costs, in RMB: average restaurant meal 30-50/person, bottle of beer 2 in shops, 5-10 in restaurants, 20 in bars, bus fare 1-2, taxi 9 first 3 km (15 or less to most places), overnight sleeper train to Beijing 400, 500 express daytime train. Clothes are much cheaper than in the west and there are great tailors too.

What to Bring
If you are coming to Harbin to live, below is a list of things that are hard to find here. Like most of China, Harbin is quickly developing its stock of Western products and services. Therefore, some of the things on the list may have recently become more available. You can see that the list is mostly minor things.

What Not to Bring

You should arrange to have internet access to your accounts so that if you need access you can access them that way. If you are working with Will-Excel Global, we are able to assist you with your banking needs since we have accounts in Canada as well as China. Western Union is also available to send cash back home if you need to.

You should bring US$ cash if you want the best exchange rates. Japanese yen and HK$ also get a good exchange, other currencies can be exchanged but will get a lower rate. Likewise, traveler's cheques will also yield a lower rate.